What is a Dhagpo Drupla ?

A Dhagpo drupla is an ordained or lay practitioner who has completed one or more three-year retreats.

A Dhagpo drupla is an ordained or lay practitioner who has completed one or more three-year retreats under the direction of Lama Gendun Rinpoche or his lamas, and who has put the teachings received into practice. This person has received and practised the entire transmission of a yidam as well as the Six Yogas of Naropa.

This training allows the practitioner to develop towards the activity of teaching by becoming a lama or to opt for another activity according to individual aspirations and qualities. One becomes a lama depending on the activity that one develops. As druplas deepen their commitment and their understanding of the Dharma, increasingly confidence is shown by their students. 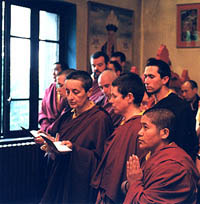 The "Lama Council" (a council of peers) that makes the decision about whether to give drupla the status of "lama" with full responsibilities.