History of the temple

In 1983, the community acquired Arnaud Desjardin's house where the three-year retreat centres would be installed. At this time it was obvious that a temple, big enough so future retreatants could receive Gendun Rinpoche's transmissions, was also needed.

Next door to Rinpoche's room, a large room which had served as the previous owner's meditation room was fitted out for this purpose.

It was patiently redecorated according to tradition while two shrines were installed, one dedicated to the 35 Confession Buddhas and the other to the Dharma protectors.

This temple became the living heart of Le Bost. Numerous spiritual events have taken place here right up until this day. The ashes of the centre's founder - Gendun Rinpoche, have been placed in this same temple. This temple is still used daily, weekly and monthly rituals while the decoration of the Karmapa's Temple is being completed. 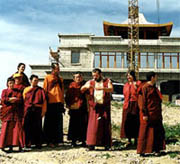 The construction of the large temple and the monastic hermitage began in 1993 on the newly acquired land adjacent to the retreat centres.

Building of the temple and monastic hermitage in Laussedat were undertaken during the same period.

Conscious of the importance of what is being created, the firm implantation of the Dharma in the West for present and future generations, future retreatant and student practioners pool resources.

After this initial effort, several generations of student practitioners followed. Some came for a few weeks, others for a few months, a year or sometimes more. Certain students stayed with the objective of accomplishing the three-year retreat or dedicating themselves to monastic life.

During the occasion of the coming out of the three-year retreat on the 22nd October 1997 Gendun Rinpoche consecrated the Karmapa's Temple. He departed nine days later.