A Tour of the Site

Much work still needs to be done on this floor. The second floor consists of an open air terrace surrounding the third level which is a small 'reliquary' room protected by a copper roof which is itself crowned with a spire (sertok.).

The access to the temple's entrance comes up from below on the eastern side so that one has to walk upwards in order to enter it. On arriving at the front terrace, the main door opens directly onto the large hall. 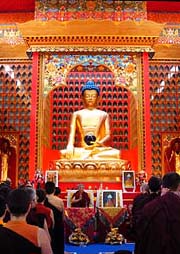 On entering, the visitor is immediately struck by the large and impressive proportions of the place. A huge shrine is seen directly in front, taking up half of the large hall's circumference.

Sitting at the heart of the shrine is a large, 5 m - high statue of the Buddha, made of copper and covered with gold leaf. Surrounding it are one thousand smaller Buddha statues each within its own niche. 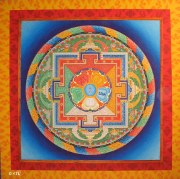 All around the hall, below the mezzanine, the visitor can admire the regularity, finesse and beauty of the bas relief, in a cubic pattern which are rich in both colour and symbolism.

In the centre of each are various representations of different deities' mandalas belonging on one side to the father tantras and on the other, to the mother tantras. On the central ceiling, currently being decorated the great Kalachakra mandala, 8 m ni diameter, representing the non-dual tantras, has been put into position. Ths shrine and inner walls will be decorated with many frescos which are to be painted by the Sacred Art School's volunteer artists.

The main statue has ben filled with relics, sacred texts and precious objects and consecrated by Shamarpa, Sherab Gyaltsen Rinpoché and the lamas during special ceremonies. On the first floor a general view of central shrine and Buddha Statue gives the visitor a new perspective. The apartments surrounding the mezzanine will include four bedrooms with bathrooms, a kitchen, a dining room and a lounge. These rooms have access to the first floor's terrace which offers a breathtaking view over the 'Puy de Dôme' mountain range.