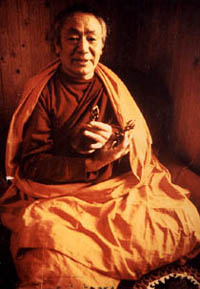 Unlike the other monks, he was only content when abiding in meditation and he spent his years learning to meditate at the feet of the great realised masters who stayed at the monastery. With all his being he yearned only for the practices of the Secret Mantra, the Vajrayana, the rapid path to spiritual realisation.

During this period of education, Rinpoche accomplished a number of solitary retreats. At the age of seventeen he received the major monastic ordination of Gelong, and in his twenty-first year he entered his monastery's retreat centre in order to accomplish the traditional retreat of three years and three months.

Animated by an unfailing faith and devotion he was a perfect recipient for the teaching and saturated his mind completely with that of his masters. Applying the practices of the tsas and loungs of the Six Yogas of Naropa, he no longer wore any other clothing than a single white cotton sheet. Also, due to his realisation of the yoga of psychic heat - 'tummo', he developed the ability to cause ice to melt. Even in mid-winter he remained in his cell without heating and filled it with heat through the power of his samadhi.

A further sign of his mastery of meditation was that he no longer felt hunger nor thirst and absorbed only a very small amount of food. He obtained direct and definitive understanding of all the states of mind including even the most subtle ones.
After his three-year retreat he remained several more years in the Kyodrag monastery dedicating himself intensively to solitary meditation in strict seclusion. His door was closed and his only visitor was the cook who took care of him and kept the key to his cell.
One day, his root lama Tulku Tenzin of Kyodrag, came to visit him, opened the door of his cell and told him, "Now it's time to go out. Your meditation has reached its conclusion. You have obtained realisation of the practice,
it's no longer useful for you to stay in retreat. You are truly a holder of the blessing and from now on you can remain among the multitude and accomplish the welfare of beings. Your realisation is unshakeable, you are like a rock of gold. You can be sure of that ! Now, act accordingly to your own will."

In spite of these words, Rinpoche stayed in retreat. Following a second visit from Tenzin Rinpoche, as well as forceful insistence from Khenpo Mingyur, a siddha who resided at the monastery and was one of his root lamas, he finally accepted. 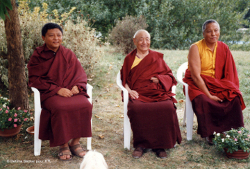 Rinpoche then undertook a pilgrimage, visiting the holy places of Tibet and Nepal, making abundant offerings and accomplishing powerful wishing prayers. After a year had passed, he continued with his practice, meditating in different caves blessed by great siddhas of the past such as Guru Rinpoche and Milarepa.

It was there that Rinpoche completed his realisation.
Although it is difficult for an ordinary person to measure the qualities of an enlightened being, the power of his grace and the warm radiance of his compassion were immediately felt. Gendun Rinpoche was also eminently recognised for his ability to subdue and convert non-human beings, malicious spirits, those who cause all kinds of imbalances, physical and mental sicknesses, evil influences and obstacles from which humans suffer.